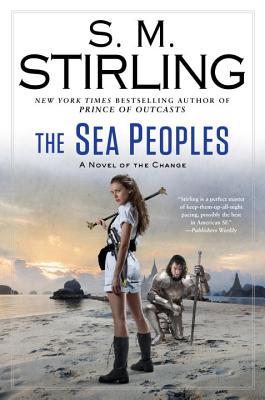 S. M. Stirling’s Novels of the Change are a “truly original combination of postapocalyptic sci-fi and military-oriented medieval fantasy”* about a future where mysterious Powers removed advanced technology, and humanity rebuilds society. However, this new world is not always a peaceful one....

The spirit of troubadour Prince John, the brother of Crown Princess Órlaith, has fallen captive to the power of the Yellow Raja and his servant, the Pallid Mask. Prince John’s motley band of friends and followers—headed by Captain Pip of Townsville and Deor Godulfson—must lead a quest through realms of shadow and dreams to rescue Prince John from a threat far worse than death.

Meanwhile, across the sea, Japanese Empress Reiko and Órlaith, heir to the High Kingdom of Montival, muster their kingdoms for war, making common cause with the reborn Kingdom of Hawaii. But more than weapons or even the dark magic of the sorcerers of Pyongyang threaten them; Órlaith's lover, Alan Thurston, might be more than he appears.

From the tropical waters off Hilo and Pearl Harbor, to the jungles and lost cities of the Ceram Sea, a game will be played where the fate of the world is at stake.

Praise For The Sea Peoples (A Novel of the Change #14)…

Praise for S. M. Stirling and His Novels of the Change

“Nobody wrecks a world better than S. M. Stirling, and nobody does a better job of showing that people remain people, with all their high points and low, in the wreckage.”—Harry Turtledove, New York Times bestselling author of Fallout

“[A] vivid portrait of a world gone insane...full of bloody action, exposition that expands character, and telling detail that makes it all seem very real.”—Statesman Journal (Salem, OR)

“Stirling’s skill as a world builder is still as sharp as ever.”—Amazing Stories

“Stirling’s series combines the best of [the] fantasy and postapocalyptic genres but rises above them both with his long vision and skill in creating compelling characters.”—Fresh Fiction

S. M. Stirling is the New York Times bestselling author of many science fiction and fantasy novels. A former lawyer and an amateur historian, he lives in the Southwest with his wife, Jan.
Loading...
or
Not Currently Available for Direct Purchase