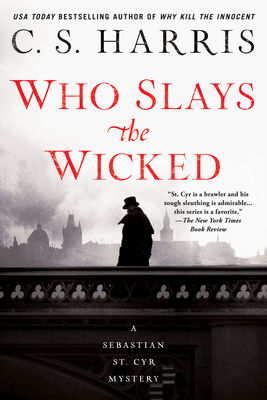 The death of a fiendish nobleman strikes close to home as Sebastian St. Cyr is tasked with finding the killer to save his young cousin from persecution in this riveting new historical mystery from the USA Today bestselling author of Why Kill the Innocent....

When the handsome but dissolute young gentleman Lord Ashworth is found brutally murdered, Sebastian St. Cyr, Viscount Devlin, is called in by Bow Street magistrate Sir Henry Lovejoy to help catch the killer. Just seven months before, Sebastian had suspected Ashworth of aiding one of his longtime friends and companions in the kidnapping and murder of a string of vulnerable street children. But Sebastian was never able to prove Ashworth's complicity. Nor was he able to prevent his troubled, headstrong young niece Stephanie from entering into a disastrous marriage with the dangerous nobleman.

Stephanie has survived the difficult birth of twin sons. But Sebastian soon discovers that her marriage has quickly degenerated into a sham. Ashworth abandoned his pregnant bride at his father's Park Street mansion and has continued living an essentially bachelor existence. And mounting evidence--ranging from a small bloody handprint to a woman's silk stocking--suggests that Ashworth's killer was a woman. Sebastian is tasked with unraveling the shocking nest of secrets surrounding Ashworth's life to keep Stephanie from being punished for his death.

Praise For Who Slays the Wicked (Sebastian St. Cyr Mystery #14)…

Praise for Who Slays the Wicked

“Fans of this long-running series will revel in the meticulous historical detail along with the twists and turns of a case that reveals the vast inequality in Regency England.”―Kirkus Reviews

“Harris’ latest, following Why Kill the Innocent (2018), once again captures the atmosphere of Regency London… the identity of the real killer is a satisfying surprise.”—Booklist

“Harris does a nice job of introducing red herrings and devising a surprising solution that fits with the clues she’s planted. …this installment is sure to satisfy fans.”―Publishers Weekly

“The story is well-paced and intriguing, with strong characterization at all levels, and it builds to a suspenseful and satisfying finish. I’ll want to read more of St. Cyr’s adventures.”—Historical Novels Review

“C.S. Harris delivers a bone-chilling treatise on evil, an answer to ‘Why do people murder?’”—Criminal Element

“…[an] always interesting historical series… St. Cyr is a brawler and his tough sleuthing is admirable; but this series is a favorite because of Harris’s unflinching studies of the poor and the wretched who share the London streets with such worthies as the Grand Duchess Catherine….” —The New York Times Book Review

“With panache, C.S. Harris (Why Kill the Innocent, What Angels Fear) brings the dark side of Regency London to life.”―Shelf Awareness

C. S. Harris is the national bestselling author of more than two dozen novels, including the Sebastian St. Cyr Mysteries; as C. S. Graham, a thriller series coauthored with former intelligence officer Steven Harris; and seven award-winning historical romances written under the name Candice Proctor. A respected scholar with a PhD in nineteenth-century Europe, she is also the author of a nonfiction historical study of the French Revolution. She lives with her husband in New Orleans and has two grown daughters.
Loading...
or support indie stores by buying on