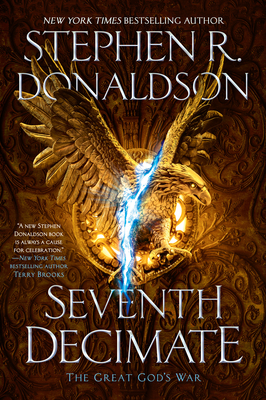 The acclaimed author of the Thomas Covenant Chronicles launches a powerful new trilogy about a prince's desperate quest for a sorcerous library to save his people.

These are the six Decimates, wielded by sorcerers for both good and evil.

But a seventh Decimate exists--the most devastating one of all...

Prince Bifalt, eldest son of the Bellegerin King, would like to see the world wiped free of sorcerers. But it is he who is charged with finding the repository of all of their knowledge, to locate the book of the seventh Decimate--and reverse the fate of his land.

All hope rests with Prince Bifalt. But the legendary library, which may or may not exist, lies beyond an unforgiving desert and treacherous mountains--and beyond the borders of his own experience. Wracked by hunger and fatigue, sacrificing loyal men along the way, Prince Bifalt will discover that there is a game being played by those far more powerful than he could ever imagine. And that he is nothing but a pawn...

But the legendary library lies beyond an unforgiving desert and treacherous mountains. Wracked by hunger and fatigue, sacrificing loyal men along the way, Bifalt will discover that there is a game being played by those far more powerful than he could ever imagine. And that he is nothing but a pawn....

“It promises to be as rich in detail as its predecessors—and, Mr. Donaldson’s trademark, as emotionally deep and as psychologically unpredictable.”--The Wall Street Journal

“A new Stephen Donaldson book is always a cause for celebration. Seventh Decimate will whet your appetite for a sequel.”—Terry Brooks, New York Times bestselling author

“A highly imaginative epic to be savored through successive readings.”—Booklist

“The War and Peace of fantasy literature.”—The Kansas City Star

Stephen R. Donaldson is the author of the original six volumes of The Chronicles of Thomas Covenant, a landmark in modern fantasy. Every volume, beginning with Lord Foul's Bane in 1977, has been an international bestseller. Donaldson returned to the series with The Last Chronicles of Thomas Covenant, which includes The Runes of the Earth, Fatal Revenant, Against All Things Ending, and The Last Dark.
Loading...
or
Not Currently Available for Direct Purchase