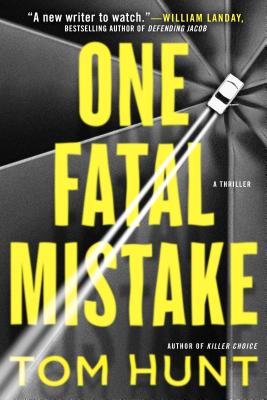 The author of Killer Choice, a thriller "full of shocks and twists you won't see coming" (Lee Child), delivers another nail-biting novel about a hit-and-run and a lie that goes horribly wrong.

Her son accidentally kills a man.
They cover it up.
Then everything goes wrong.

When eighteen-year-old Joshua Mayo takes a man's life in a terrible accident, he leaves the scene without reporting the crime to the police. He hopes to put the awful night behind him and move on with his life. But, of course, he ends up telling his mother, Karen, what happened.

Karen has raised Joshua on her own in Cedar Rapids, Iowa--and she'd thought they'd finally made it. He was doing well in school and was only months away from starting college at his dream school. After hearing his dark confession, she's forced to make a choice no parent should have to make. A choice that draws them both into a web of deceit that will change their lives forever--if they can make it out alive.

Tom Hunt is an award-winning advertising copywriter. He has worked for some of the nation's largest and best-known agencies, including J. Walter Thompson and Saatchi & Saatchi. Killer Choice was his first novel.

Praise For One Fatal Mistake…

PRAISE FOR ONE FATAL MISTAKE

“Recommended for fans of nail-biters in the tradition of Lee Child and Harlan Coben.”—Booklist

“Fans of Harlan Coben or Mary Kubica will want to add this promising author to their lineup of favorites.”—Library Journal

“A complex and chilling plot...each twist and turn wraps the reader in a tighter coil.”—Graham Brown, New York Times bestselling coauthor of Nighthawk

“A lightning-fast ride that’ll keep you guessing until the end...a one-sit read.”—Brad Parks, author of Closer Than You Know

“A twisting, spiraling ride with an ending that hits you in the gut.”—Jamie Freveletti, author of Dead Asleep

“Speeds along like the best of Lee Child....A harrowing ride into desperation.”—Jonathan Moore, author of The Dark Room