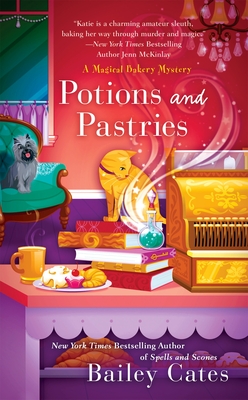 It’s been exactly two years since Katie and her aunt and uncle opened the Honeybee Bakery, where they serve delicious—and bespelled—treats to the good people of Savannah. After a dinner celebrating the bakery’s anniversary, they all take a stroll along the waterfront and meet Aunt Lucy’s friend Orla, a colorful character who has been telling the fortunes of locals and tourists alike for years.

The next day, Orla meets with what seems like a terrible accident, but Katie’s witchy intuition tells her it was something more sinister. Together with her trustworthy coven and her firefighter boyfriend, she’ll race to find out what happened to the unfortunate fortune-teller before the piping hot trail goes cold....

Praise For Potions and Pastries (A Magical Bakery Mystery #7)…

Praise for the Magical Bakery Mysteries

“[The] sixth of the Magical Bakery Mystery series remains as entertaining as the first, with a mythology that is as developed as Katie’s newfound talent and life within the Savannah magical community.”—Kings River Life Magazine

“Ms. Cates has most assuredly found the right ingredients...a series that is a finely sifted blend of drama, suspense, romance, and otherworldly elements.”—Once Upon a Romance

“As a fan of magic and witches in my cozies, Cates’s series remains a favorite.”—Fresh Fiction

Bailey Cates believes magic is all around us if we only look for it. She is the New York Times bestselling author of the Magical Bakery Mysteries, including Spells and Scones, Magic and Macaroons, and Some Enchanted Éclair. Writing as Bailey Cattrell, she is also the author of the Enchanted Garden Mysteries, which began with Daisies for Innocence.
Loading...
or support indie stores by buying on