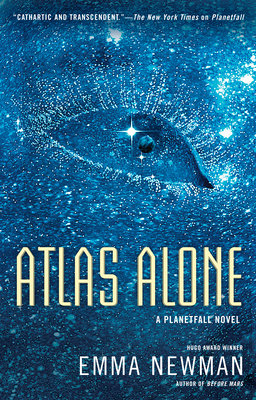 Hugo Award winner Emma Newman returns to the captivating Planetfall universe with a novel about vengeance and the lengths to which one will go to save the future of humanity.

Six months after she left, Dee is struggling to manage her rage toward the people who ordered the nuclear strike that destroyed Earth. She’s trying to find those responsible, but she’s not getting very far alone.

A dedicated gamer, Dee is endeavoring to discover a mersive good enough to enable her to escape her trauma. When she is approached by a designer who asks her to play test his new game, she hopes it will be what she needs—but it isn’t like any mersive she’s played before. When a man suddenly dies in the real world, she realizes that at the same time in the game, she killed a character who bears a striking resemblance to the dead man—a man she discovers was one of those responsible for the death of millions on Earth.

Disturbed, but thinking it must be a coincidence, Dee continues the hunt for information. But when she finds out the plans for the future colony, she realizes that to save what is left of humanity, she might have to do something that risks what remains of her own.

“Emma Newman is one of the very best modern science fiction writers pushing the boundaries of the genre.”—Adrian Tchaikovsky, Clarke Award winning author of Children of Time

“Atlas Alone is a deeply, deeply unsettling horror novel, one that juxtaposes the personal trauma of one woman and a world-wide catastrophe and what happens when the two combine to tell a story of post-traumatic stress disorder and vengeance.”—Kirkus

Praise for the Planetfall novels

"Gripping and sorrowful, this imaginative story is a satisfying return to Newman's future of greed and hope."--Publishers Weekly (starred review)

"A thrilling tale of murder, mystery, and madness...will keep you riveted until the very last page."--Kameron Hurly, author of The Stars Are Legion

"The murder investigation will intrigue readers, while the overall feeling of something more sinister happening keeps the pages turning until the unexpected conclusion."--Booklist