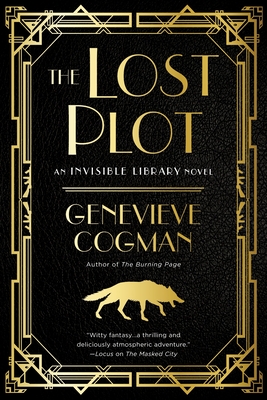 After being commissioned to find a rare book, Librarian Irene and her assistant, Kai, head to Prohibition-era New York and are thrust into the middle of a political fight with dragons, mobsters, and Fae in this novel in the Invisible Library series.

In a 1920s-esque New York, Prohibition is in force; fedoras, flapper dresses, and tommy guns are in fashion: and intrigue is afoot. Intrepid Librarians Irene and Kai find themselves caught in the middle of a dragon political contest. It seems a young Librarian has become tangled in this conflict, and if they can’t extricate him, there could be serious repercussions for the mysterious Library. And, as the balance of power across mighty factions hangs in the balance, this could even trigger war.

Irene and Kai are locked in a race against time (and dragons) to procure a rare book. They’ll face gangsters, blackmail, and the Library’s own Internal Affairs department. And if it doesn’t end well, it could have dire consequences on Irene’s job. And, incidentally, on her life...

Praise For The Lost Plot (The Invisible Library Novel #4)…

Praise for the Invisible Library Novels

“A book in which to wallow.”—The Guardian (UK)

“Ms. Cogman has opened a new pathway into our vast heritage of imagined wonderlands. And yet, as her story reminds us, we yearn for still more.”—The Wall Street Journal

“Funny, exciting, and oh-so-inspiring, this is the kind of fantasy novel that will have female readers everywhere gearing up for their own adventure.”—Bustle

Genevieve Cogman is a freelance author who has written for several role-playing game companies. She currently works for the National Health Service in England as a clinical classifications specialist. She is the author of the Invisible Library series, including The Mortal Word, The Lost Plot, The Burning Page, The Masked City, and The Invisible Library.
Loading...
or support indie stores by buying on