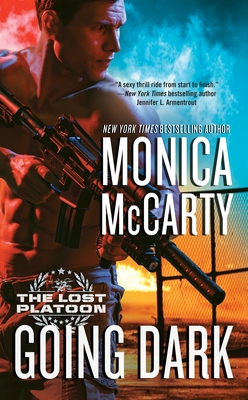 The members of a top secret SEAL Team can’t keep their passion under wraps in the first novel in this contemporary romantic suspense series from New York Times bestselling author Monica McCarty.

Like Rome’s Lost Legion, a SEAL platoon goes on a mission and vanishes without a trace...

After walking into a trap on a covert op in Russia, the men from top secret SEAL Team Nine are presumed dead. Not knowing whom they can trust, and with war hanging in the balance, the survivors must go dark and scatter around the globe.

Marine ecologist Annie Henderson joins her new boyfriend on a trip to the Western Isles of Scotland to protest a hazardous offshore drilling venture. When she realizes that she may be swept up in something far more dangerous than she’d intended, there is only one man she can turn to...

She and the mysterious but sexy dive boat captain haven’t exactly gotten off to the best start, but something about his quiet confidence makes her think that he’s the kind of man she can depend on. Because he’s gruff and guarded, she can tell Dan Warren has secrets. But she could never imagine how high the stakes are for him to keep his cover, even as he risks everything to protect her...

“McCarty crafts a story full of edge-of-your seat thrills and unexpected twists, all perfectly underscored by a toe-curling romance that feels utterly believable given the high stakes situations. Adrenaline-soaked action sequences and witty, often politically driven banter take you on a sexy and intense thrill ride where you fall in love with the characters as swiftly as they do with each other.”—Entertainment Weekly

“McCarty's first installment in her Lost Platoon series—Going Dark—features betrayal, murder and Eco-terrorism. The non-stop action and love story are guaranteed to keep you turning the pages to find out what happens to Dean and Annie.”—Catherine Coulter, #1 New York Times bestselling author

“The background politics, ensuing conversations between two smart and well-drawn characters, and the mystery of SEAL Team 9—who survived and why they were ambushed—elevate McCarty’s above many military romances. Readers will find it hard to wait for the next in the series.”—Booklist (starred review)

“McCarty’s foray into romantic suspense is non-stop action from beginning to end. This fast-paced story will have readers hanging on to the edge of their seats wondering where it will take them next. With the two main characters on a course set for disaster, the attraction between them cannot be denied. With no one left to trust, are they being completely honest with each other? A great read by the talented McCarty!”—RT Book Reviews

Monica McCarty is a New York Times and USA Today bestselling author of historical romances, including the Highland Guard series, the Campbell trilogy, and the MacLeods of Skye trilogy. The Lost Platoon is her first romantic suspense series. She is published all over the world.
Loading...
or
Not Currently Available for Direct Purchase