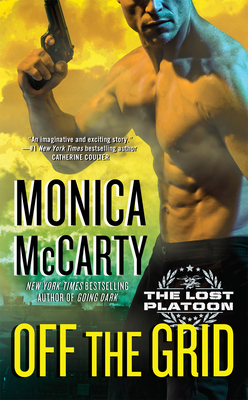 Off the Grid (The Lost Platoon #2)

A hunt for dangerous secrets leads to explosive chemistry in this exhilarating romantic suspense novel from the New York Times bestselling author of Going Dark.

A team of Navy SEALs go on a mission and disappear without a trace--they are The Lost Platoon.

Investigative reporter Brittany Blake may have stumbled upon the story of a lifetime in her search for her missing brother. When he seemingly disappears overnight, she refuses to accept the Navy's less-than-satisfying explanation. She begins her own investigation, which leads her to top-secret SEAL teams, covert ops, and a possible cover up...

John Donovan is having trouble biding his time, waiting for his Commanding Officer to figure out who set up their platoon. John's best friend and BUD/S partner, Brandon Blake, was one of the many lives tragically lost in the attack against his team. When Brandon's sister, Brittany, tracks John down, looking for answers, he realizes that she may be their best bet--or bait--for finding out who is targeting SEAL Team Nine.

Praise For Off the Grid (The Lost Platoon #2)…

"McCarty's first installment in her Lost Platoon series—Going Dark—features betrayal, murder, and ecoterrorism. The nonstop action and love story are guaranteed to keep you turning the pages to find out what happens to Dean and Annie."—#1 New York Times bestselling author Catherine Coulter

“McCarty’s foray into romantic suspense is nonstop action from beginning to end. This fast-paced story will have readers hanging on to the edge of their seats, wondering where it will take them next...a great read by the talented McCarty!”—RT Book Reviews

“The background politics, ensuing conversations between two smart and well-drawn characters, and the mystery of SEAL Team Nine—who survived and why they were ambushed—elevate McCarty's above many military romances. Readers will find it hard to wait for the next in the series.”—Booklist (starred review)

“McCarty's exciting contemporary series launch will not disappoint fans of her historical Highlands romances, as she finds plenty of ways to bring in Scottish elements and even the occasional kilt.”—Publishers Weekly

Monica McCarty is the bestselling author of The Arrow, The Raider, The Hunter, the Highlander trilogy, the Campbell trilogy, and more. Her interest in the Scottish clan system began in the most unlikely of places: a comparative legal history course at Stanford Law School. After a short but enjoyable stint as an attorney, she realized that her career as a lawyer paired with her husband’s transitory life as a professional baseball player was not the best match. So she traded in her legal briefs for Scottish historical romances with sexy alpha heroes. She now lives in the San Francisco Bay Area with her husband and their two children.
Loading...
or
Not Currently Available for Direct Purchase