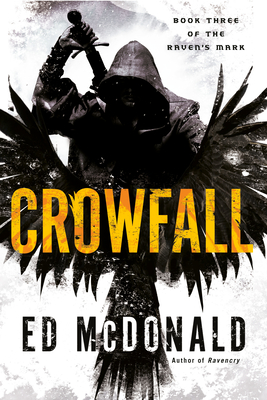 In the third gritty installment of the Raven's Mark series, Blackwing Captain Ryhalt Galharrow finds that all power comes with a price...

A sorcerous cataclysm has hit the Range, the final defensive line between the republic and the immortal Deep Kings.

Tormenting red rains sweep the land, new monstrosities feed on fear in the darkness, and the power of the Nameless, the gods who protect the republic, lies broken. The Blackwing captains who serve them are being picked off one by one, and even immortals have learned what it means to die. Meanwhile, the Deep Kings have only grown stronger, and they are poised to deliver a blow that will finally end the war.

Ryhalt Galharrow stands apart from it all.

He has been deeper into the wasteland known as the Misery than ever before. It has grown within him--changed him--and now the ghosts of his past, formerly confined to the Misery, walk with him everywhere.

They will even follow him--and the few surviving Blackwing captains--on one final mission into the darkness.

“This series has been truly magnificent from start to finish, and I am grateful for it.”— Peter McClean, author of Priest of Bones

"Gripping fantastical drama…McDonald continues to build on the strengths that made Blackwing compelling: tense and violent action, genuinely disturbing settings and creatures, and bursts of morbid humor."—Publishers Weekly

“In Ravencry, McDonald has crafted a desolate world brimming with creativity and dark fantasy that tests the boundaries of faith and belief.”—Fantasy Book Review

“To say that Ravencry is a triumph would be to do it an injustice… Ed McDonald can't help but have you fall in love with the characters and get emotionally invested, only to see them tested in the most violent and torturous of ways.”—Out Of This World

"Ed McDonald handles the action with a deft hand and has created a compelling central character who remains likeable despite a lengthy list of flaws. A remarkably assured fantasy debut that mixes the inventiveness of China Miéville with the fast-paced heroics of David Gemmell."--Anthony Ryan, New York Times bestselling author of The Empire of Ashes

"Blackwing is a bloody, gritty fantasy novel that manages not to sacrifice its heart.  I love the world, which feels strange and lived-in, and the strength of the voice is fantastic.  Fans of Glen Cook's The Black Company or Joe Abercrombie's The First Law series will be very happy with this one."--Django Wexler, author of The Infernal Battalion
or
Buy Here
Copyright © 2020 American Booksellers Association