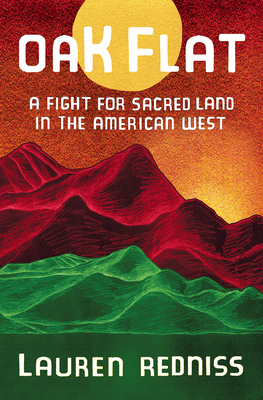 A Fight for Sacred Land in the American West

“Oak Flat is simultaneously an object of mesmerizing beauty and an urgent book of complete necessity. Lauren Redniss tells the tale of the struggle to preserve a site sacred to the Apache people from a copper mining project that would destroy it. Her vibrant illustrations and careful curation of competing voices convey the high stakes while honoring the dignity of the people on both sides, and the dignity of the natural world. This book is an astonishing achievement.”
— Keith Mosman, Powell's Books, Portland, OR
View the List

Oak Flat is a serene high-elevation mesa that sits above the southeastern Arizona desert, fifteen miles to the west of the San Carlos Apache Indian Reservation. For the San Carlos tribe, Oak Flat is a holy place, an ancient burial ground and religious site where Apache girls celebrate the coming-of-age ritual known as the Sunrise Ceremony. In 1995, a massive untapped copper reserve was discovered nearby. A decade later, a law was passed transferring the area to a private company, whose planned copper mine will wipe Oak Flat off the map—sending its natural springs, petroglyph-covered rocks, and old-growth trees tumbling into a void.

Redniss’s deep reporting and haunting artwork anchor this mesmerizing human narrative. Oak Flat tells the story of a race-against-time struggle for a swath of American land, which pits one of the poorest communities in the United States against the federal government and two of the world’s largest mining conglomerates. The book follows the fortunes of two families with profound connections to the contested site: the Nosies, an Apache family whose teenage daughter is an activist and leader in the Oak Flat fight, and the Gorhams, a mining family whose patriarch was a sheriff in the lawless early days of Arizona statehood.

The still-unresolved Oak Flat conflict is ripped from today’s headlines, but its story resonates with foundational American themes: the saga of westward expansion, the resistance and resilience of Native peoples, and the efforts of profiteers to control the land and unearth treasure beneath it while the lives of individuals hang in the balance.

Praise For Oak Flat: A Fight for Sacred Land in the American West…

“An artist and writer, Ms. Redniss has a flair for weaving deep reporting and visual storytelling into immersive and engrossing nonfiction. Redniss’s colorful pencil and crayon drawings capture the surreal beauty of the region, with its rocky canyons and gnarly old-growth trees. Regardless of one’s loyalties, Oak Flat conveys the pernicious consequences of viewing land as a resource to be exploited, relentlessly and with little regard for the future.”—The Wall Street Journal

“Lauren Redniss creates books like no one else’s. . . . Oak Flat moves seamlessly between settings, and between voices. . . . Redniss’s stylistic, empathic, and intellectual gifts [are] on great, and equivalent, display. . . . [Her illustrations are] drawn with such animation they seem ready to rise from the page. . . . Oak Flat is a fervent and beautiful argument. . . . It is, one might hope, proof of art's purpose: to expand minds, to promote beauty, and to make change.”—NPR

“The author makes her niche in the little-discussed ‘visual nonfiction’ genre, writing and illustrating books that read like journalism but feel like artsy graphic novels. . . . Between gentle, full-page colored pencil drawings of kind faces and blissful landscapes, Redniss offers mountains of research and interviews.”—The Philadelphia Inquirer

“In conveying the story of the ongoing clash over a patch of southeastern Arizona—site of priceless copper deposits, but also sacred Apache land—Redniss weaves together physics, history, geology, legislative chicanery, intimate portraiture, and tribal custom and culture into a vivid, searing, indelible act of witness.”—Patrick Radden Keefe, New York Times bestselling author of Say Nothing

“Oak Flat left me stunned. History, testimony, art, landscape: Lauren Redniss weaves these elements together to evoke the rock and sand and sky of the Arizona desert, and to bring to life the story of the people for whom that land is sacred. Rarely is a book simultaneously so heartfelt and so brilliant.”—David Treuer, New York Times bestselling author of The Heartbeat of Wounded Knee

“Blending journalism, politics, poetry, and art is a literary high-wire act. Lauren Redniss is one of the few artists who can do it. Oak Flat is a bewitching and mesmerizing book.”—Marjane Satrapi, author of Persepolis

“Artistically and thematically profound . . . As a work of advocacy, the book is compelling and convincing; as a work of art, it is masterful.”—Kirkus Reviews (starred review)

Lauren Redniss is the author of several works of visual non-fiction and the recipient of a MacArthur Foundation “genius grant.” Her book Thunder & Lightning: Weather Past, Present, Future won the 2016 PEN/E. O. Wilson Literary Science Writing Award. Radioactive: Marie & Pierre Curie, A Tale of Love and Fallout was a finalist for the 2011 National Book Award. She has been a Guggenheim fellow, a fellow at the New America Foundation and the New York Public Library’s Cullman Center for Scholars & Writers, and Artist-in-Residence at the American Museum of Natural History. She teaches at the Parsons School of Design in New York City.
Loading...
or support indie stores by buying on