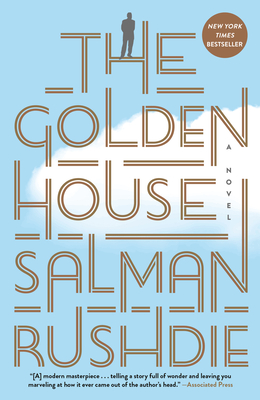 ONE OF THE BEST BOOKS OF THE YEAR: NPR, PBS, Harper’s Bazaar, Esquire, Financial Times, The Times of India

Set against the strange and exuberant backdrop of current American culture and politics, The Golden House also marks Salman Rushdie’s triumphant and exciting return to realism. The result is a modern epic of love and terrorism, loss and reinvention—a powerful, timely story told with the daring and panache that make Salman Rushdie a force of light in our dark new age.

Praise For The Golden House: A Novel…

“A recognizably Rushdie novel in its playfulness, its verbal jousting, its audacious bravado, its unapologetic erudition, and its sheer, dazzling brilliance.”—The Boston Globe

“A joy to read . . . clever, intimidating, jocund, and electrifying.”—Chicago Review of Books

“The Golden House . . . ranks among Rushdie’s most ambitious and provocative books [and] displays the quicksilver wit and playful storytelling of Rushdie’s best work.”—USA Today

“From Nero to Obama, via The Godfather . . . The veteran novelist blends ancient history and myth with popular culture, crime caper and film techniques to fashion a morality tale for today.”—The Guardian

“A tale of identity, reinvention, truth (and lies), and terror, The Golden House captures the climate of American politics and culture from the Obama era to today.”—BuzzFeed

“The Golden House is a brilliant examination of the times we are living in today. A must read!”—PopSugar

“Powerful. . . . The great strength of The Golden House is Rushdie’s ability to balance the fairy tale tone of the story with gritty realities.”—The Toronto Star

“A sort of Great Gatsby for our time: everyone is implicated, no one is innocent, and no one comes out unscathed.”—Kirkus Reviews (starred review)

Salman Rushdie is the author of fourteen previous novels, including Midnight’s Children (for which he won the Booker Prize and the Best of the Booker), Shame, The Satanic Verses, The Moor’s Last Sigh, and Quichotte, all of which have been shortlisted for the Booker Prize; a collection of stories, East, West; a memoir, Joseph Anton; a work of reportage, The Jaguar Smile; and three collections of essays, most recently Languages of Truth. His many awards include the Whitbread Prize for Best Novel, which he won twice; the PEN/Allen Foundation Literary Service Award; the National Arts Award; the French Prix du Meilleur Livre Étranger; the European Union’s Aristeion Prize for Literature; the Budapest Grand Prize for Literature; and the Italian Premio Grinzane Cavour. He is a member of the American Academy of Arts and Letters and a fellow of the American Academy of Arts and Sciences, and he is a Distinguished Writer in Residence at New York University. He is a former president of PEN America. His books have been translated into over forty languages.
Loading...
or support indie stores by buying on