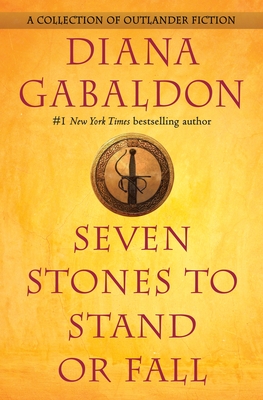 Seven Stones to Stand or Fall

A Collection of Outlander Fiction

Among the seven spellbinding pieces there is “The Custom of the Army,” which begins with Lord John Grey being shocked by an electric eel and ends at the Battle of Quebec. Then comes “The Space Between,” where it is revealed that the Comte St. Germain is not dead, Master Raymond appears, and a widowed young wine dealer escorts a would-be novice to a convent in Paris. In “A Plague of Zombies,” Lord John unexpectedly becomes military governor of Jamaica when the original governor is gnawed by what probably wasn’t a giant rat. “A Leaf on the Wind of All Hallows” is the moving story of Roger MacKenzie’s parents during World War II. In “Virgins,” Jamie Fraser, aged nineteen, and Ian Murray, aged twenty, become mercenaries in France, no matter that neither has yet bedded a lass or killed a man. But they’re trying. . . . “A Fugitive Green” is the story of Lord John’s elder brother, Hal, and a seventeen-year-old rare book dealer with a sideline in theft, forgery, and blackmail. And finally, in “Besieged,” Lord John learns that his mother is in Havana—and that the British Navy is on their way to lay siege to the city.

Filling in mesmerizing chapters in the lives of characters readers have followed over the course of thousands of pages, Gabaldon’s genius is on full display throughout this must-have collection.

“Gabaldon is in fine form . . . weaving together characters’ lives, connecting plot points, and showing tantalizing glimpses of the larger Outlander world, of which this reader can never get enough.”—Historical Novels Review

Praise For Seven Stones to Stand or Fall: A Collection of Outlander Fiction…

“[Diana] Gabaldon is in fine form . . . weaving together characters’ lives, connecting plot points, and showing tantalizing glimpses of the larger Outlander world, of which this reader can never get enough.”—Historical Novels Review

Diana Gabaldon is the #1 New York Times bestselling author of the wildly popular Outlander novels—Outlander, Dragonfly in Amber, Voyager, Drums of Autumn, The Fiery Cross, A Breath of Snow and Ashes (for which she won a Quill Award and the Corine International Book Prize), An Echo in the Bone, and Written in My Own Heart’s Blood—as well as the related Lord John Grey books Lord John and the Private Matter, Lord John and the Brotherhood of the Blade, Lord John and the Hand of Devils, and The Scottish Prisoner; two works of nonfiction, The Outlandish Companion, Volumes 1 and 2; and the Outlander graphic novel, The Exile. She lives in Scottsdale, Arizona, with her husband.
Loading...
or support indie stores by buying on