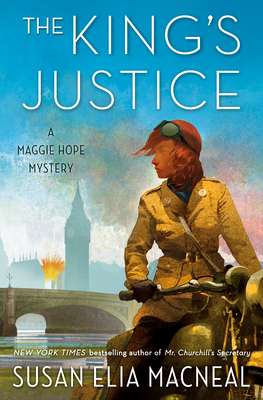 Maggie Hope started out as Winston Churchill’s secretary, but now she’s a secret agent—and the only one who can figure out how the missing violin ties into a series of horrifying murders.

London, December 1943. As the Russian army repels German forces from Stalingrad, Maggie Hope takes a much-needed break from spying to defuse bombs in London. But Maggie herself is an explosion waiting to happen. Traumatized by her past, she finds herself living dangerously—taking huge risks, smoking, drinking, and speeding through the city streets on a motorbike. The last thing she wants is to get entangled in another crime.

But when she’s called upon to look into the theft of a Stradivarius, one of the finest violins ever made, Maggie can’t resist. Meanwhile, there’s a serial killer on the loose in London, targeting conscientious objectors. Little does Maggie know that investigating this dangerous predator will pit her against a new evil—and old enemies. Only Maggie can uncover the connection between the robbery, the murders, and a link to her own past.

Praise For The King's Justice: A Maggie Hope Mystery…

“How far can a multitalented woman be pushed before she breaks? British-born, American-raised Maggie Hope has held an amazing series of jobs since moving to war-torn London. She's worked for Winston Churchill, traveled as a spy to Berlin and Paris, and escaped from a Scottish island where someone has been killing exiled Special Operations Executive agents. . . . And she's [now] faced with a new serial murder case when suitcases filled with bones turn up in the Thames. . . . A bit of code-breaking and some deeper insight into Reitter break open the case but put Maggie in the killer's crosshairs. Action-packed, intertwined mysteries featuring an introspective heroine and packed with little-known historical details.”—Kirkus Reviews

“Vivid descriptions of devastated London and distinctive, emotionally flawed characters enhance a plot that builds to a wicked twist. This enjoyable effort will inspire those new to MacNeal to seek out earlier entries.””—Publishers Weekly

“I have read and loved every single one of the Maggie Hope mysteries. In her ninth, The King’s Justice, Susan Elia MacNeal raises the bar. Maggie faces old enemies, new killers, and her personal demons—not to mention unexploded ordinance—with an extra helping of her own special brand of derring-do. Longtime readers will be richly rewarded and first-timers will be made instant fans by this taut, breathtaking, and authentic read.”—Pam Jenoff, New York Times bestselling author of The Lost Girls of Paris

“In The King’s Justice, Maggie Hope, a veteran of missions for the Special Operations Executive, is suffering from what we now call PTSD and doing it none too quietly. The mystery is riveting, but Maggie’s emotional journey is at the heart of this superb novel as she struggles to come to grips with the impact of the violence she has endured, as did so many. I devoured this story.”—James R. Benn, author of When Hell Struck Twelve and other Billy Boyle WWII mysteries

“Susan Elia MacNeal spins another rousing tale featuring gutsy Maggie Hope. Once again, MacNeal deftly weaves a fast-paced mystery with enticing historical detail, but this time gives us a fully realized exploration of a psychologically wounded but still determined survivor of the darkness of war. . . . A multilayered thriller that will keep you up all night reading!”—Melanie Benjamin, New York Times bestselling author of The Aviator's Wife and The Swans of Fifth Avenue

“The King’s Justice is gripping. It is reality, gritty and frightening. I feel the cold, the fear, and the courage. The very air of it exists on the edges of my own memory.”—Anne Perry, bestselling author of Death in Focus

“With any luck the adventures of red-haired super-sleuth Maggie Hope will go on forever. Maggie makes for an appealingly damaged heroine, struggling to overcome the emotional scars that espionage and murder have left on her soul, losing herself in cigarettes, scotch, and risk-taking—but the war won’t allow Maggie much in the way of rest, as a serial killer, a missing Stradivarius, and the sensational murder trial of her last antagonist collide in a new series of challenges. Taut, well-plotted, and suspenseful, this is a wartime mystery to sink your teeth into.”—Kate Quinn, New York Times bestselling author of The Huntress

“Inimitable, indefatigable, intrepid—there simply are not enough good adjectives to describe Maggie Hope. The latest installment of Susan Elia MacNeal’s masterful series brings us a wiser and wounded Maggie, one who defuses bombs and buzzes around London on her motorbike, drowning her demons in pink gin and pitting her wits against a serial killer determined to have the last laugh. I was riveted from the first page to the last, rooting for Maggie all the way. Reading her latest adventure is like walking a tightrope made of razor wire.”—Deanna Raybourn, New York Times bestselling author of A Murderous Relation

“Set in wartime London 1943, Susan Elia MacNeal’s latest Maggie Hope novel, The King’s Justice, is a powerfully emotional work that poses difficult questions for Maggie as she searches for justice. Or is it actually vengeance she wants? Perhaps redemption? A charismatic but severely damaged heroine, Maggie’s a ticking bomb, not unlike the dangerous, unexploded ordnance it’s her job to defuse daily. The King’s Justice is a poetically nuanced portrayal of London in war, twisted souls, and hard moral choices. But more than anything else—and best of all—it’s a brilliant novel featuring a very human Wonder Woman.”—James W. Ziskin

“A new Maggie Hope mystery is always cause for joy, and The King’s Justice proves once again that Susan Elia MacNeal sits at the top of her genre. Beautifully written and meticulously researched, this novel immerses readers in the threadbare vibrancy of wartime London and the moral complexity at the heart of justice, as Maggie battles her own despair to track down a murderer of extraordinary depravity. MacNeal spins yet another superb yarn that will leave you yearning for the next.” –Beatriz Williams

Susan Elia MacNeal is the New York Times, Washington Post, and USA Today bestselling author of the Maggie Hope mystery series. She won the Barry Award and has been nominated for the Edgar, Macavity, Agatha, Left Coast Crime, Dilys, and ITW Thriller awards. She lives in Brooklyn, New York, with her husband and son.
Loading...
or support indie stores by buying on