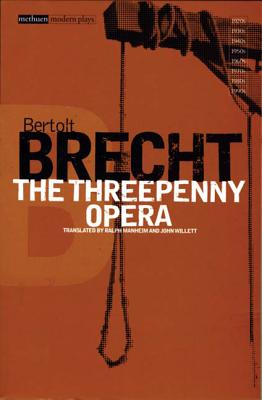 Based on John Gay's eighteenth century Beggar's Opera, The Threepenny Opera, first staged in 1928 at the Theater am Schiffbauerdamm in Berlin, is a vicious satire on the bourgeois capitalist society of the Weimar Republic, but set in a mock-Victorian Soho. It focuses on the feud between Macheaf - an amoral criminal - and his father in law, a racketeer who controls and exploits London's beggars and is intent on having Macheaf hanged. Despite the resistance by Macheaf's friend the Chief of Police, Macheaf is eventually condemned to hang until in a comic reversal the queen pardons him and grants him a title and land. With Kurt Weill's unforgettable music - one of the earliest and most successful attempts to introduce jazz to the theatre - it became a popular hit throughout the western world.

Published in Methuen Drama's Modern Classics series in a trusted translation by Ralph Manheim and John Willett, this edition features extensive notes and commentary including an introduction to the play, Brecht's own notes on the play, a full appendix of textual variants, a note by composer Kurt Weill, a transcript of a discussion about the play between Brecht and a theatre director, plus editorial notes on the genesis of the play.

"An excellent resource...Willett and Manheim have become the unchallenged mediators of Brecht for the English-speaking audience."—Marc Silberman, Editor, Brecht Yearbook “At last—the definitive translations of one of the 20th century’s most influential playwrights…Far superior to the competition.”—Theatre Journal

Bertolt Brecht (1898-1956) is acknowledged as one of the great dramatists whose work has had a considerable influence on the theatre. His landmark plays include Mother Courage and Her Children, The Threepenny Opera, Life of Galileo, and The Caucasian Chalk Circle.Circle. His plays and dramatic theory are central to the study of modern theatre.
Loading...
or support indie stores by buying on