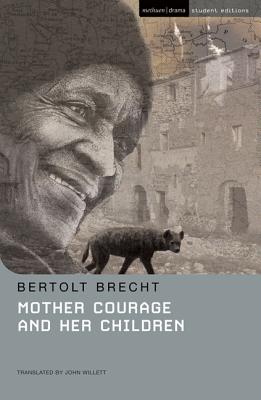 This Student Edition of Brecht's anti-war masterpiece features an extensive
introduction and commentary that includes a plot summary, discussion of
the context, themes, characters, style and language as well as
questions for further study and notes on words and phrases in the text.
It is the perfect edition for students of theatre and literature.
In this chronicle of the Thirty Years War of the seventeenth century, Mother Courage follows the armies back and forth across Europe, selling provisions and liquor from her canteen wagon. As the action of the play progresses between the years 1624 and 1646 she loses her children to the war but remains indomitable, refusing to part with her livelihood - the wagon. The play is one of the most celebrated examples of Epic Theatre and of Brecht's use of alienation effect to focus attention on the issues of the play above the individual characters. It remains regarded as one of the greatest plays of the twentieth century and one of the great anti-war plays of all time. The Berlin production of 1949, with Helene Weigel as Mother Courage, marked the foundation of the Berliner Ensemble.

This volume contains expert notes on the author's life and work, historical and political background to the play, photographs from stage productions and a glossary of difficult words and phrases. The play is translated by Brecht scholar John Willett who did more than anyone else to make Brecht's work available in the English language.

A major dramatist of the twentieth century, Bertolt Brecht (1898-1956) was the founder of one of the most influential theatre companies, the Berliner Ensemble, and the creator of some of the landmark plays of the twentieth century: The Threepenny Opera, Life of Galileo, Mother Courage and The Caucasian Chalk Circle. His plays and dramatic theory are central to the study of modern theatre.
Loading...
or
Not Currently Available for Direct Purchase