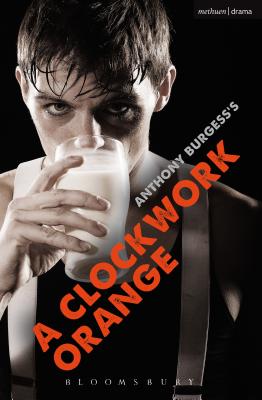 Anthony Burgess's stage play of his infamous cult novel and film of the same name.

Alex and his vicious teenage gang revel in horrific violence, mugging and gang rape. Alex also revels in the music of Beethoven. The Gang communicates in a language which is as complicated as their actions. When a drug-fuelled night of fun ends in murder, Alex is finally busted and banged up. He is given a choice - be brainwashed into good citizenship and set free, or face a lifetime inside. Anthony Burgess's play with music, based on his own provocative 1962 novella of the same name, was first published in 1987. A Clockwork Orange was made into a film classic by Stanley Kubrick in 1971 and was dramatizes by the RSC in 1990.

“A piece that, in its focus on youthful disaffection and the state's attempts to control antisocial behaviour, is as pertinent as it was 50 years ago. Maybe even more so ... This "right nasty little shocker", as Burgess put it, still has the power to disturb.” – Lyn Gardner, Guardian

“This high-octane adaptation of Anthony Burgess's Clockwork Orange has lost none of its impact ... It's not an easy watch - but then, with Burgess's urgent commentary on the mechanisation of human society and its inevitably violent consequences seeming just as relevant now as it was in 1962, it never should be.” – Laura Barnett, Telegraph

“It seems even more relevant as a commentary on the “disaffected youth” ... high art constantly pushes up against ultraviolence” – Emily Jupp, Independent

Anthony Burgess was born in Manchester in 1917. From 1954 to 1960 he was stationed in Malaysia as an education officer - during this time he started writing The Malayan Trilogy. Diagnosed with an unoperable brain tumour in 1959, Burgess became a full-time writer and went on to write a book a year up until his death in 1993. His many works include: The Complete Enderby, Tremor of Intent and The Kingdom of the Wicked.
Loading...
or support indie stores by buying on