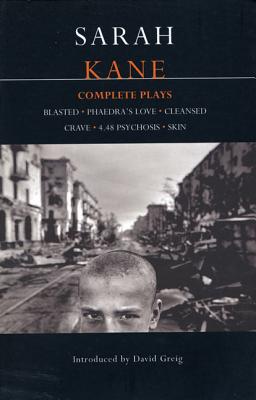 When Blasted was first produced at the Royal Court in 1995 it was hailed jointly as a masterpiece and a 'disgusting piece of filth' (Daily Mail). Subsequently that play, and the others that followed, have been produced all over the world. This anthology includes Kane's never-before-published Channel 4 screenplay, Skin.Kane wrote simply and starkly about the world she saw around her...a mature and vividly theatrical response to the pain of living. Guardian

"Sarah Kane, a provocative playwright whose bleak view of the limitations of human relationships and graphic dramatizations of violence and sex earned her a reputation as an enfant terrible of the British theater...Blasted immediately established her as an important voice in modern playwriting."—The New York Times "Kane wrote simply and starkly about the world she saw around her…a mature and vividly theatrical response to the pain of living."—Guardian  "Shocking and revelatory."—New York Magazine (Blasted review) "As compact and beautiful as a diamond in structure—and yet the mood it inspires is as black as coal."—Time Out (4.48 Psychosis review) "A hugely unnerving theatrical experience, shot through with the language of the Bible and a genuinesly poetic richness."—Time Out (Crave review) "The writing has an almost unparalleled distiled intensity which is often unbearable to watch...To some it will be repellent.Others will recognize it as absolute proof of the power of live theatre."—Independent  (Cleansed review) "Pure theatre. Or rather, impure theatre: dirty, alarming, dangerous."—Observer (Phaedra's Love review)

Sarah Kane (1971 - 1999) was an English dramatist. She is best known for the extraordinary public controversy over Blasted, her first play which, like subsequent works from her, were shocking and defining moments in theater: explosive, theatrical, lyrical and laced with emotional power and bleak humor.
Loading...
or support indie stores by buying on