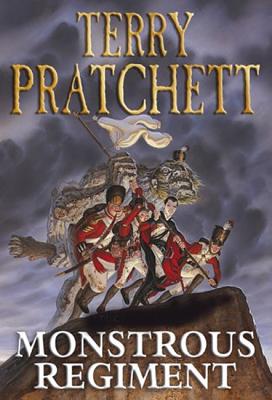 A new stage adaptation of one of Pratchett's best-selling novels

The Monstrous Regiment in question is made up of a vampire (reformed and off the blood, thank you), a troll, Igor (who is only too happy to sew you a new leg if you aren't too particular about previous ownership), a collection of misfits and a young woman discovers that a pair of socks shoved down her pants is a good way to open up doors in a man's army."One of the funniest English authors alive" (Independent)

"One of the funniest English authors alive"—Independent

Terry Pratchett is one of the most popular authors writing today. He lives behind a keyboard in Wilt shire and says he 'doesn't want to get a life, because it feels as though he's trying to lead three already'. He was appointed OBE in 1998. He is the author of the phenomenally successful Discworld se ries and his trilogy for young readers, The Bromeliad, is scheduled to be adapted into a spectacular animated movie. His latest book, The Truth, is the 25th novel in the Discworld series.
Loading...
or support indie stores by buying on