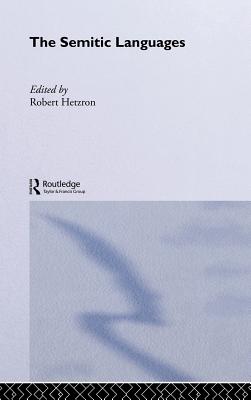 The Semitic Languages presents a unique, comprehensive survey of individual languages or language clusters from their origins in antiquity to their present-day forms.
The Semitic family occupies a position of great historical and linguistic significance: the spoken and written languages of the Phoenicians, Hebrews and Arabs spread throughout Asia and northern and central Africa; the Old Semitic civilizations in turn contributed significantly to European culture; and modern Hebrew, modern literary Arabic, Amharic, and Tigrinya have become their nations' official languages.
The book is divided into three parts and each chapter presents a self-contained article, written by a recognized expert in the field.
* I. General Issues: providing an introduction to the grammatical traditions, subgrouping and writing systems of this language family.
* II. Old Semitic Languages
* III. Modern Semitic Languages
Parts II and III contain structured chapters, which enable the reader to access and compare information easily. These individual descriptions of each language or cluster include phonology, morphology, syntax, lexis and dialects.
Suggestions are made for the most useful sources of further reading and the work is comprehensively indexed.

Robert Hetzron is formerly of the Department of Germanic, Oriental and Slavic Languages, University of California at Santa Barbara.
or support indie stores by buying on
Copyright © 2020 American Booksellers Association