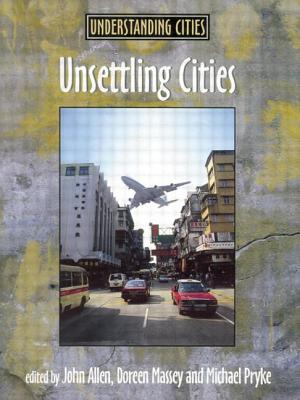 This text examines the global nature of cities - cities whose openness has shaped their dynamism and character.
It explores cities as sites of movement, migration and settlement where different peoples, cultures and environments combine. Unsettling Cities explores the mix of proximity and difference that exists in the rich and diverse texture of city life. The contributors reveal the association between the changing fortunes of cities and the power and influence of global networks.

John Allen is Senior Lecturer in Economic Geography at The Open University. His recent publictions include A Shrinking World? (1995, co-edited with Chris Hamnett) and Rethinking the Region (1998, with Doreen Masssey and Alan Cochrane) Doreen Massey is Professor of Geography at The Open University. She is co-founder and joint editor of Soundings: a journal of politics and culture Her recent books include Spatial Divisions of Labour (2nd Ed 1995) and Space, Place and Gender (1994).Michael Pryke is Lecturer in the Faculty of Social Sciences at The Open University. He has published a number of articles
Loading...
or support indie stores by buying on