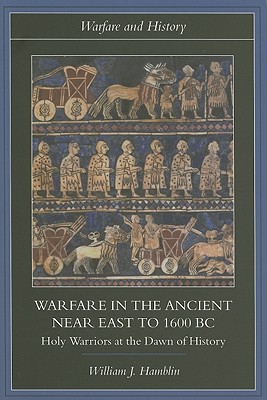 Warfare in the Ancient Near East to 1600 BC

Holy Warriors at the Dawn of History (Warfare and History)

The only book available that covers this subject, Warfare in the Ancient Near East is a groundbreaking and fascinating study of ancient near Eastern military history from the Neolithic era to the middle Bronze Ages.

Drawing on an extensive range of textual, artistic and archaeological data, William J. Hamblin synthesizes current knowledge and offers a detailed analysis of the military technology, ideology and practices of Near Eastern warfare.

Paying particular attention to the earliest known examples of holy war ideaology in Mesopotamia and Egypt, Hamblin focuses on:

* recruitment and training of the infantry
* the logistics and weaponry of warfare
* the shift from stone to metal weapons
* the role played by magic
* narratives of combat and artistic representations of battle
* the origins and development of the chariot as military transportation
* fortifications and siegecraft
*developments in naval warfare.


Beautifully illustrated, including maps of the region, this book is essential for experts and non-specialists alike.

William J. Hamblin is Associate Professor at Brigham Young University, Utah. He has written and taught on both the ancient near east and on the same region in the middle ages.
Loading...
or support indie stores by buying on