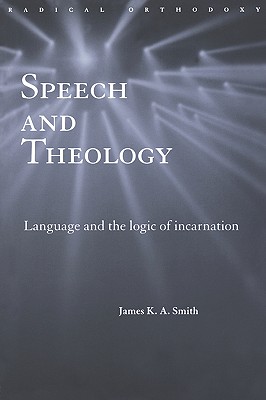 Language and the Logic of Incarnation (Routledge Radical Orthodoxy)

God is infinite, but language finite; thus speech would seem to condemn Him to finitude. In speaking of God, would the theologian violate divine transcendence by reducing God to immanence, or choose, rather, to remain silent? At stake in this argument is a core problem of the conditions of divine revelation. How, in terms of language and the limitations of human understanding, can transcendence ever be made known? Does its very appearance not undermine its transcendence, its condition of unknowability?
Speech and Theology posits that the paradigm for the encounter between the material and the divine, or the immanent and transcendent, is found in the Incarnation: God's voluntary self-immersion in the human world as an expression of His love for His creation. By this key act of grace, hinged upon Christs condescension to human finitude, philosophy acquires the means not simply to speak of perfection, which is to speak theologically, but to bridge the gap between word and thing in general sense.

James K.A. Smith is an Assistant Professor of Philosophy at Loyola Marymount University in California.
Loading...
or support indie stores by buying on