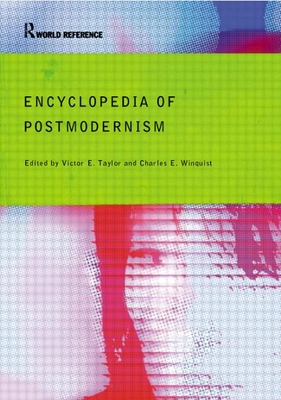 The Encyclopedia of Postmodernism provides comprehensive and authoritative coverage of academic disciplines, critical terms and central figures relating to the vast field of postmodern studies. With three cross-referenced sections, the volume is easily accessible to readers with specialized research agendas and general interests in contemporary cultural, historical, literary and philosophical issues.
Since its inception in the 1960s, postmodernism has emerged as a significant cultural, political and intellectual force that many scholars would argue defines our era. Postmodernism, in its various configurations, has consistently challenged concepts of selfhood, knowledge formation, aesthetics, ethics, history and politics. This Encyclopedia offers a wide-range of perspectives on postmodernism that illustrates the plurality of this critical concept that is so much part of our current intellectual debates. In this regard, the volume does not adhere to a single definition of postmodernism as much as it documents the use of the term across a variety of academic and cultural pursuits.
The Encyclopedia of Postmodernism, it must be noted, resists simply presenting postmodernism as a new style among many styles occuring in the post-disciplinary academy. Documenting the use of the term acknowledges that postmodernism has a much deeper and long-lasting effect on academic and cultural life. In general, the volume rests on the understanding that postmodernism is not so much a style as it is an on-going process, a process of both disintegration and reformation.