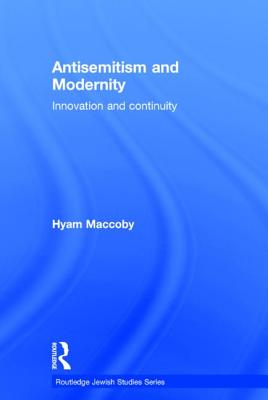 The subject of anti-Semitism, not long ago thought to be a dead issue, has been revised due to the conflict between Israel and the Palestinians. Maccoby traces the now topical discussion of the origins of Anti-Semitism, and especially its development in the modern world. The key questions that are addressed include:

How is it that this medieval prejudice proved so lasting and potent? Are the roots of anti-Semitism religious? If so, how do these roots differ in Christianity and Islam? By what means did it bridge the gap between medievalism and Enlightenment? How was it that many of the most respected Enlightenment figures (such as Voltaire) dedicated as they were to tolerance and pluralism, retained a virulent anti-Semitism?

These questions, and many more, are dealt with as Maccoby explores the roots of the anti-Semitism, tracing it from its origins, and shows how it has changed in accordance with the shifting ideas of the modern world but without changing in its essence.

Antisemitism and Modernity is essential reading for those with interests in the development of anti-Semitism, its manifestation in the current world and its future.