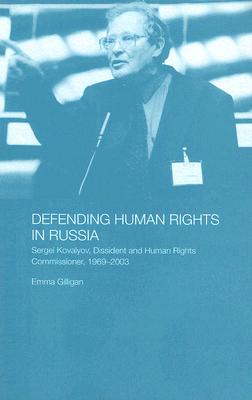 Sergei Kovalyov is a central figure in the struggle for human rights in Russia. He was a leading Soviet biology academic and, in the 1970s after becoming active in dissident circles, was arrested by the KGB, tried, imprisoned and subjected to internal exile. After his release, he continued to work for human rights, eventually becoming chairman of the Soviet Human Rights Committee and chairman of the Presidential Human Rights Commission, in which positions he was extremely influential in framing human rights provisions in post-Communist Russia. He subsequently took President Yeltsin to task for human rights failings, eventually resigning in protest. This book, by tracing Kovalyov's political career, shows how human rights developed in Russia in late Soviet and post Soviet times.

Emma Gilligan received a Ph.D from the University of Melbourne, Australia in 2002. She spent five years in Moscow, researching for this book and working for The Andrei Sakharov Foundation. She is currently a post-doctoral fellow with the History Department at the University of Chicago working on a book on human rights and Chechnya.
or
Not Currently Available for Direct Purchase