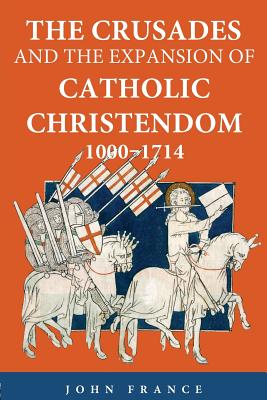 The Crusades and the Expansion of Catholic Christendom, 1000-1714

The Crusades and the Expansion of Catholic Christendom, 1000-1714 is a fascinating and accessible survey that places the medieval Crusades in their European context, and examines, for the first time, their impact on European expansion.

Taking a unique approach that focuses on the motivation behind the Crusades, John France chronologically examines the whole crusading movement, from the development of a 'crusading impulse' in the eleventh century through to an examination of the relationship between the Crusades and the imperialist imperatives of the early modern period.

France provides a detailed examination of the first Crusade, the expansion and climax of crusading during the twelfth and thirteenth centuries and the failure and fragmentation of such practices in the fourteenth and fifteenth centuries.

Concluding with an assessment of the influence of the Crusades across history, and replete with illustrations, maps, timelines, guides for further reading, and a detailed list of rulers across Europe and the Muslim world, this study provides students with an essential guide to a central aspect of medieval history.

John France is Professor of History and Dean of the Faculty of Arts and Social Sciences at the University of Wales, Swansea. His previous publications include Western Warfare in the Age of the Crusades, 1000-1300 (1999).
Loading...
or support indie stores by buying on