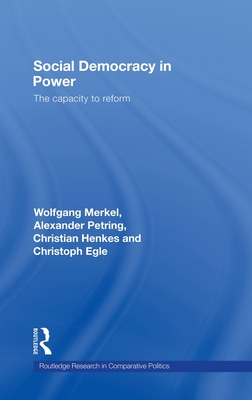 The Capacity to Reform (Routledge Research in Comparative Politics #22)

Social Democracy in Power will be of interest to students and scholars of politics, comparative politics, European studies and public policy.

Wolfgang Merkel is Professor of Political Science at Humboldt University, and Director of the Research Unit 'Democracy' at the Social Science Research Center Berlin (WZB), Germany. Alexander Petring and Christian Henkes are Research Fellows at the WZB. Christoph Egle is a Lecturer at the Ludwig-Maximilians-University, Munich, Germany.
Loading...
or support indie stores by buying on