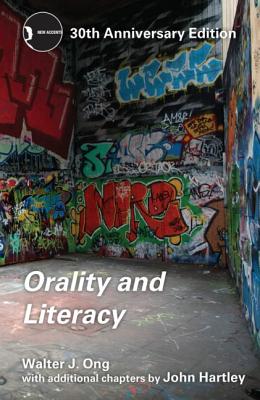 The Technologizing of the Word (New Accents)

Walter J. Ong's classic work provides a fascinating insight into the social effects of oral, written, printed and electronic technologies, and their impact on philosophical, theological, scientific and literary thought.

This thirtieth anniversary edition - coinciding with Ong's centenary year - reproduces his best-known and most influential book in full and brings it up to date with two new exploratory essays by cultural writer and critic John Hartley.

A scene-setting chapter that situates Ong's work within the historical and disciplinary context of post-war Americanism and the rise of communication and media studies; A closing chapter that follows up Ong's work on orality and literacy in relation to evolving media forms, with a discussion of recent criticisms of Ong's approach, and an assessment of his concept of the 'evolution of consciousness'; Extensive references to recent scholarship on orality, literacy and the study of knowledge technologies, tracing changes in how we know what we know.

These illuminating essays contextualize Ong within recent intellectual history, and display his work's continuing force in the ongoing study of the relationship between literature and the media, as well as that of psychology, education and sociological thought.

Walter J. Ong (30 November 1912 - 12 August 2003) was University Professor Emeritus at Saint Louis University, USA, where he was previously Professor of English and Professor of Humanities in Psychiatry. His many publications have been highly influential for studies in the evolution of consciousness.John Hartley is an educator, author, researcher and commentator on the history and cultural impact of television, journalism, popular media and creative industries. He is Professor of Cultural Science and Director of the Centre for Culture & Technology at Curtin University, Western Australia.
Loading...
or support indie stores by buying on