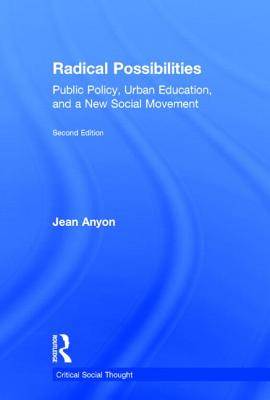 The core argument of Jean Anyon's classic Radical Possibilities is deceptively simple: if we do not direct our attention to the ways in which federal and metropolitan policies maintain the poverty that plagues communities in American cities, urban school reform as currently conceived is doomed to fail. With every chapter thoroughly revised and updated, this edition picks up where the 2005 publication left off, including a completely new chapter detailing how three decades of political decisions leading up to the "Great Recession" produced an economic crisis of epic proportions. By tracing the root causes of the financial crisis, Anyon effectively demonstrates the concrete effects of economic decision-making on the education sector, revealing in particular the disastrous impacts of these policies on black and Latino communities.

Going beyond lament, Radical Possibilities offers those interested in a better future for the millions of America's poor families a set of practical and theoretical insights. Expanding on her paradigm for combating educational injustice, Anyon discusses the Occupy Wall Street movement as a recent example of popular resistance in this new edition, set against a larger framework of civil rights history. A ringing call to action, Radical Possibilities reminds readers that throughout U.S. history, equitable public policies have typically been created as a result of the political pressure brought to bear by social movements. Ultimately, Anyon's revelations teach us that the current moment contains its own very real radical possibilities.

Jean Anyon is professor of social and educational policy in the Doctoral Program in Urban Education at the Graduate Center of the City University of New York. She is the author of the best-selling and critically acclaimed Ghetto Schooling: A Political Economy of Urban School Reform.
Loading...
or
Not Currently Available for Direct Purchase