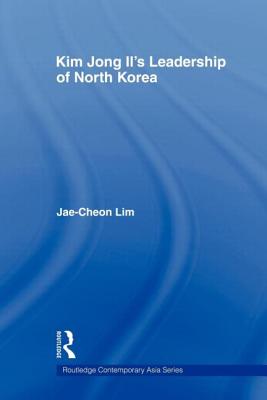 Kim Jong Il came to power after the death of his father Kim Il Sung in 1994. Contrary to expectations, he has succeeded in maintaining enough political stability to remain in power. Kim Jong Il's Leadership of North Korea is an examination of how political power has been developed, transmitted from father to son, and now operates in North Korea

Using a variety of original North Korean sources as well as South Korean materials Jae-Cheon Lim pieces together the ostensibly contradictory and inconsistent facts into a conceptual coherent framework. This book considers Kim and his leadership through an analytical framework. composed of four main elements: i) Kim as a leader of a totalitarian society; ii) as a politician; iii) as a Korean; and iv) as an individual person.

This illuminating account of what constitutes power and how it is used makes an important contribution to the understanding of an opaque and difficult regime. It will be of interest for upper level undergraduate, postgraduates and academics interested in North Korean politics, and also those in Political theory.

Jae-Cheon Lim is researcher at the Institute for Korean Unification studies, Yonsei University
Loading...
or support indie stores by buying on