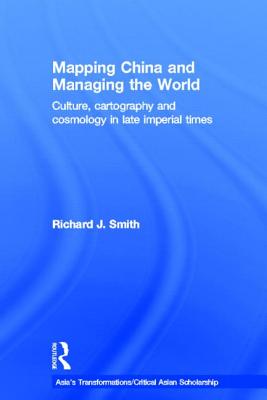 Mapping China and Managing the World

From the founding of the Qin dynasty in 221 BCE to the present, the Chinese have been preoccupied with the concept of order (zhi). This cultural preoccupation has found expression not only in China's highly refined bureaucratic institutions and methods of social and economic organization but also in Chinese philosophy, religious and secular ritual, and a number of comprehensive systems for classifying every form of human achievement, as well as all natural and supernatural phenomena. Richard J. Smith's Mapping China and Managing the World focuses on several crucial devices employed by the Chinese for understanding and ordering their vast and variegated world, which they saw as encompassing "all under Heaven."

The book begins with discussions of how the ancient work known as the Yijing (Classic of Changes) and maps of "the world" became two prominent means by which the Chinese in imperial times (221 BCE to 1912) managed space and time. Smith goes on to show how ritual (li) served as a powerful tool for overcoming disorder, structuring Chinese society, and maintaining dynastic legitimacy. He then develops the idea that just as the Chinese classics and histories ordered the past, and ritual ordered the present, so divination ordered the future. The book concludes by emphasizing the enduring relevance of the Yijing in Chinese intellectual and cultural life as well as its place in the history of Sino-foreign interactions.

This selection of essays by one of the foremost scholars of Chinese intellectual and cultural history will be welcomed by Chinese and East Asian historians, as well as those interested more broadly in the cultures of, and interactions between, China and East Asia.

Richard J. Smith is the George and Nancy Rupp Professor of Humanities and Professor of History at Rice University, USA
Loading...
or
Not Currently Available for Direct Purchase