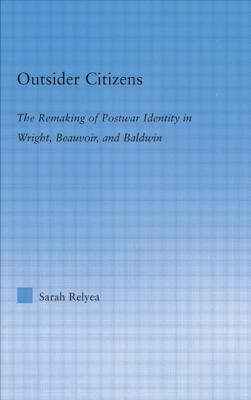 The Remaking of Postwar Identity in Wright, Beauvoir, and Baldwin (Literary Criticism and Cultural Theory)

Outsider Citizens examines a foundational moment in the writing of race, gender, and sexuality--the decade after 1945, when Richard Wright, Simone de Beauvoir, and others sought to adapt existentialism and psychoanalysis to the representation of newly emerging public identities. Relyea offers the first book-length study bringing together Wright and Beauvoir to reveal their common sources and concerns. Relyea's discussion begins with Native Son and then examines Wright's postwar exile in France and his engagement with existentialism and psychoanalysis in The Outsider. Beauvoir met Wright during her postwar tour of America, chronicled in America Day by Day. After returning to France, Beauvoir adapted American social constructionist concepts of race as one source for her philosophical investigation of gender in The Second Sex, while also rejecting 1940s psychoanalytic theories of femininity. Relyea examines later representations of race and gender in a discussion of James Baldwin's critique of postwar American liberalism and ideals of innocence and masculinity in Giovanni's Room, which represents the remaking of white American identity through the risks of exile and the return of the gaze.

Sarah Relyea is an Assistant Professor of English at National Central University, Taiwan. She holds a B.A. from Harvard University and a Ph.D. in English from the Graduate Center of the City University of New York (CUNY). Her forthcoming publications include The Vanguard of Modernity: Richard Wright's The Outsider, in Texas Studies in Literature and Language, and Psychoanalysis and The Second Sex: Simone de Beauvoir's Response to Helene Deutsch, in the Acts of the conference Simone de Beauvoir ritorna in Italia.
Loading...
or support indie stores by buying on