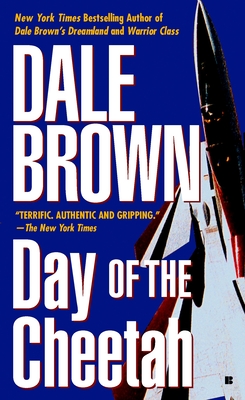 In this explosive New York Times bestseller, Dale Brown creates a shattering scenario of the ultimate race for technology...

America’s most advanced fighter plane, DreamStar, has been hijacked. To retrieve it, Lt. Col. Patrick McLanahan takes on his most perilous assignment since The Flight of the Old Dog.

The odds are against him. His aircraft, the Cheetah, hasn’t the speed, the power, or the technology of the DreamStar—his skills behind the stick are the only advantage he’s got. And so begins the greatest high-flying chase of all time...

Praise For Day of the Cheetah (Patrick McLanahan Series #4)…

Praise for Day of the Cheetah

“One of the godfathers of techno-thrillers.”—The REAL Book Spy

“The best military adventure writer in the country today.”—Clive Cussler

“There’s so much action here it’s a wonder there aren’t bullet holes and bomb craters on every page.”—Kirkus Reviews

Former U.S. Air Force captain Dale Brown is the bestselling author of numerous action-adventure “techno-thriller” novels, including those in the Patrick McLanahan series and the Brad McLanahan series. He is the co-author—with Jim DeFelice—of the bestselling Dreamland techno-thriller series and the Puppet Master series. He is also a technical consultant on the Act of War PC real-time strategy game published by Atari Interactive, and the Megafortress PC flight simulator by Three-Sixty Pacific. His novels have been published in 11 languages and distributed to over 70 countries.
Loading...
or
Not Currently Available for Direct Purchase