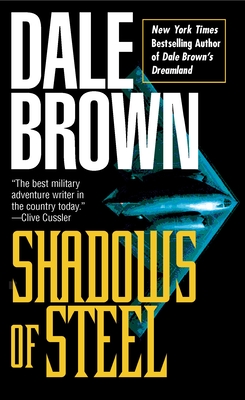 In an electrifying novel ripped from today’s headlines, Dale Brown takes to the skies to deliver a covert battle in the Middle East—a battle that America can’t afford to lose.

The new gulf war is erupting…

And this one will be far bloodier than the first. A newly powerful Iran is flexing its military muscle in the Middle East. The Iranians have declared the Persian Gulf their territorial waters—and an American ship has just been sunk to prove the point.

With a military racked by budget cuts and a public reluctant to fight, the president must end the crisis before it escalates. The solution: project Future Flight, a surgical stealth campaign to silence Iran’s modern weapons. The personnel: Colonel Patrick McLanahan and the surviving crew of the Old Dog. The stakes: success—or full-scale war…

“The best military adventure writer in the country.”—Clive Cussler

Dale is a volunteer pilot for AirLifeLine, a non-profit national charitable medical transportation organization who fly needy persons free of charge to receive treatment. He also supports a number of organizations to support and promote law enforcement and reading. He is a member of the Airplane Owners and Pilots Association, The Writers Guild, and a Life Member of the Air Force Association and U.S. Naval Institute. He is a multi-engine and instrument-rated private pilot and can often be found in the skies all across the United States, piloting his Piper Aerostar 602P. On the ground, Dale enjoys tennis, scuba diving, and hockey. He lives in Incline Village, Nevada.
Loading...
or
Not Currently Available for Direct Purchase