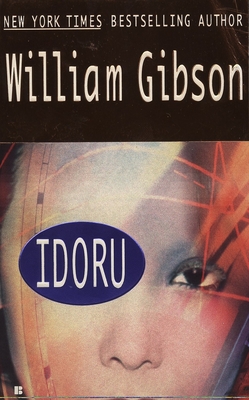 21st century Tokyo, after the millennial quake. Neon rain. Light everywhere blowing under any door you might try to close. Where the New Buildings, the largest in the world, erect themselves unaided, their slow rippling movements like the contractions of a sea-creature...

Colin Laney is here looking for work. He is an intuitive fisher for patterns of information, the “signature” an individual creates simply by going about the business of living. But Laney knows how to sift for the dangerous bits. Which makes him useful—to certain people.

Chia McKenzie is here on a rescue mission. She’s fourteen. Her idol is the singer Rez, of the band Lo/Rez. When the Seattle chapter of the Lo/Rez fan club decided that he might be in trouble in Tokyo, they sent Chia to check it out.

Rei Toei is the idoru—the beautiful, entirely virtual media star adored by all Japan. Rez has declared that he will marry her. This is the rumor that has brought Chia to Tokyo. True or not, the idoru and the powerful interests surrounding her are enough to put all their lives in danger...

“Idoru induces reader anxiety, an almost hurtful need to jack into the next page...Every word is where it should be—lean, evocative, tense. Popular culture is William Gibson’s playground. Enjoy the ride.”—Wired

“Idoru is a prophecy, a prayer for information baths that never drown the supplicant. It is also a text on paper, beautifully written, dense with metaphors that open the eyes to the new, dreamlike, intensely imagined, deeply plausible. It is a profoundly cunning advertisement for a world whose enclosed spaces—and infinite domains within the skull—we had better be prepared to join.”—The Washington Post Book World

“Gibson’s vision is disturbing, his speculation brilliant and his prose immaculate, cementing his reputation as the premier visionary working in SF today.”—Publishers Weekly (starred review)

“Gibson envisions a future in which the lines between the virtual and the actual are terminally blurred. How ‘real’ are today's celebrities?...What will happen when the Web allows anyone—anyone at all—to be a star? With characteristic brilliance, the writer who invented the word cyberspace looks for answers.”—Rolling Stone

“Gibson remains, like Chandler, an intoxicating stylist...Clever and provocative scenery...vivid, slangy prose. Chia is one of his most winning creations.”—The New York Times Book Review

“Spooky...[Idoru is] a sharp satire on the uses and abuses of technology and has much to tell us about the dangerous path science has laid out for us.”—Baltimore Sun

“Gibson's trademark of high-tech pyrotechnics and dark psychological comedy is in evidence throughout Idoru, and his characters are as compelling as ever. Gibson’s novel should come with a warning label: Objects in novel may be closer than they appear.”—Time Out