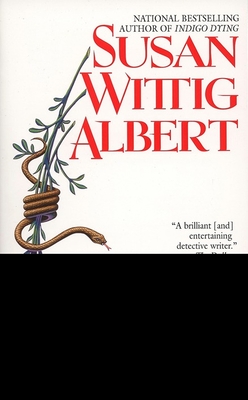 Herbalist China Bayles must solve a mother of a murder in this mystery from New York Times bestselling author Susan Wittig Albert.

In search of respite, China takes off to St. Theresa's Monastery with her friend Maggie, a former nun. The goal is a brief, tranquil retreat—but there's a conflict at the convent. The mother superior has recently died, and a battle over the future of St. Theresa's suggests that her sudden demise might not have been accidental. Now, China's quest for a replenished spirit takes second place to a more earthbound pursuit: catching a killer...

Susan Wittig Albert grew up on a farm in Illinois and earned her Ph.D. at the University of California at Berkeley. A former professor of English and a university administrator and vice president, she is the author of the China Bayles Mysteries, the Darling Dahlias Mysteries, and the Cottage Tales of Beatrix Potter. Some of her recent titles include Widow’s Tears, Cat’s Claw, The Darling Dahlias and the Confederate Rose, and The Tale of Castle Cottage. She and her husband, Bill, coauthor a series of Victorian-Edwardian mysteries under the name Robin Paige, which includes such titles as Death at Glamis Castle and Death at Whitechapel.
Loading...
or support indie stores by buying on
(This book is on backorder)