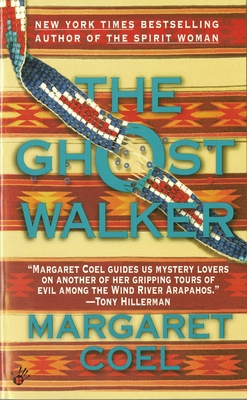 Father John O'Malley comes across the corpse lying in a ditch beside the highway. When he returns with the police, it is gone. The Arapahos of the Wind River Reservation speak of Ghost Walkers—tormented souls caught between the earth and the spirit world, who are capable of anything.

Then, within days, a young man disappears from the Reservation without a trace. A young woman is found brutally murdered. And as Father John and Arapaho lawyer Vicky Holden investigate these crimes, someone—or something—begins following them.

Together, Vicky and Father John must draw upon ancient Arapaho traditions to stop a killer, explain the inexplicable, and put a ghost to rest...

Praise For The Ghost Walker (A Wind River Reservation Mystery #2)…

Margaret Coel is the New York Times bestselling, award-winning author of the acclaimed Wind River Mysteries featuring Father John O’Malley and Vicky Holden, as well as the Catherine McLeod Mysteries and several works of nonfiction. Originally a historian by trade, she is considered an expert on the Arapaho Indians. A native of Colorado, she resides in Boulder.
Loading...
or support indie stores by buying on