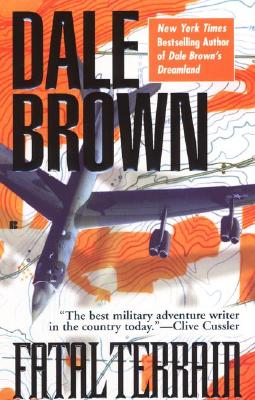 The bestselling author of Dale Brown's Dreamland and Warrior Class, Dale Brown thrills readers with his chillingly realistic descriptions of high-tech warfare. Now, in this explosive novel, Brown takes to the Asian skies...

The People's Republic of China has launched a terrifying attack against Taiwan. Cold. Swift. Deadly. The U.S. isn't willing to stand by and watch, but when they come to Taiwan's aid, they're dealt an unexpected blow from Chinese forces. It looks like the U.S. is going down...

Until aerial strike warfare expert Patrick McLanahan and genius Jon Masters come into the picture. Together, they have created a monster--the EB-52 Megafortress. A high-tech display of weaponry, fully equipped with stealth cruise missiles. The most sophisticated bomber the world has ever seen. The unsinkable "flying battleship."

Now China is on its way to a nuclear high noon. And the Doomsday clock is ticking...

“Brown is excellent at fully animating his characters…and his ability to bring technical weaponry to life is amazing…Brown’s combat sequences are first-rate.” San Francisco Chronicle

“A master at mixing technology and action. He puts readers right into the middle of the inferno.”Larry Bond

Former U.S. Air Force captain Dale Brown is the author of several best-selling military-action-aviation-adventure novels: Flight of the Old Dog (1987), Silver Tower (1988), Day of the Cheetah (1989), Hammerheads (1990), Sky Masters (1991), Night of the Hawk (1992), Chains of Command (1993), Storming Heaven (1994) and Shadows of Steel (1996). Dale's novels are published in 11 languages and distributed to over 70 countries. Dale was born in Buffalo, New York on November 2, 1956. He graduated from Penn State University and received an Air Force commission in 1978. He was a navigator-bombardier in the B-52G Stratofortress heavy bomber and the FB-111A supersonic medium bomber, and is the recipient of several military decorations and awards including the Air Force Commendation Medal with oak leaf cluster, the Combat Crew Award, and the Marksmanship ribbon. He flew over 2500 hours in various military tactical and training aircraft from 1978 to 1986 and was also a graduate of the U.S. Army Airborne School. Dale is a volunteer pilot for AirLifeLine, a non-profit national charitable medical transportation organization who fly needy persons free of charge to receive treatment. He also supports a number of organizations to support and promote law enforcement and reading. He is a member of the Airplane Owners and Pilots Association, The Writers Guild, and a Life Member of the Air Force Association and U.S. Naval Institute. He is a multi-engine and instrument-rated private pilot and can often be found in the skies all across the United States, piloting his Piper Aerostar 602P. On the ground, Dale enjoys tennis, scuba diving, and hockey. He lives in Incline Village, Nevada.
Loading...
or
Not Currently Available for Direct Purchase