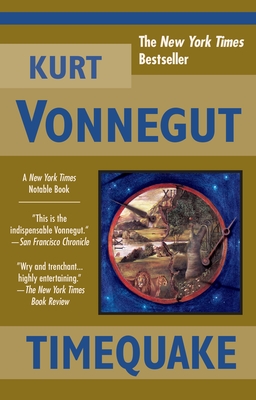 A New York Times Notable Book from the acclaimed author of Slaughterhouse-Five, Breakfast of Champions, and Cat's Cradle.

At 2:27pm on February 13th of the year 2001, the Universe suffered a crisis in self-confidence. Should it go on expanding indefinitely? What was the point?

There's been a timequake. And everyone—even you—must live the decade between February 17, 1991 and February 17, 2001 over again. The trick is that we all have to do exactly the same things as we did the first time—minute by minute, hour by hour, year by year, betting on the wrong horse again, marrying the wrong person again. Why? You'll have to ask the old science fiction writer, Kilgore Trout. This was all his idea.

“[A] quirky mix of fiction and biography...This is the indispensable Vonnegut.”—San Francisco Chronicle

“His funniest book since Breakfast of Champions...There are nuggets of Vonnegutian wisdom throughout.”—Newsweek

“Timequake is a novel by, and starring, Kurt Vonnegut...What Vonnegut does, which no one can do better, is give a big postmodern shrug...You've got to love him.”—The Washington Post Book World

Kurt Vonnegut was a master of contemporary American literature. His black humor, satiric voice, and incomparable imagination first captured America’s attention in The Sirens of Titan in 1959 and established him, in the words of The New York Times, as “a true artist” with the publication of Cat’s Cradle in 1963. He was, as Graham Greene declared, “one of the best living American writers.” Mr. Vonnegut passed away in April 2007.
Loading...
or support indie stores by buying on