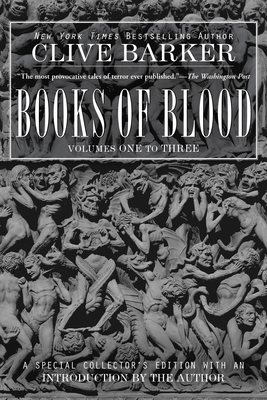 Rediscover the true meaning of fear in this collection of horror stories from New York Times bestselling author Clive Barker.

“The most provocative tales of terror ever published.”—The Washington Post

Everybody is a book of blood; wherever we're opened, we're red...

With the publication of Books of Blood, Clive Barker became an overnight literary sensation. His tour de force collection of brilliantly disturbing tales demonstrated a genius for dark invention that rivaled Poe and Sade. He was hailed by Stephen King as “the future of horror,” and won both the British and World Fantasy Awards.

Now, with his numerous bestsellers, graphic novels, and hit movies like the Hellraiser films, Clive Barker has become an industry unto himself. It is his powerful writing style and arresting imagery that have made Books of Blood a classic—and Clive Barker a cult phenomenon.

“He scares even me...What Barker does in the Books of Blood makes the rest of us look like we've been asleep for the last ten years. Some of the stories were so creepily awful that I literally could not read them alone; others go up and over the edge and into gruesome territory...He's an original.”—Stephen King

“Barker's eye is unblinking; he drags out our terrors from the shadows and forces us to look upon them and despair or laugh with relief.”—The Washington Post

“Mixing elements of horror, science fiction and surrealist literature, Barker's work reads like a cross between Stephen King and South American novelist Gabriel Garcia Marquez. He creates a world where our biggest fears appear to be our own dreams.”—Boston Herald

“Clive Barker assaults our senses and our psyche, seeking not so much to tingle our spine as to snap it altogether.”—Los Angeles Times

Born in Liverpool in 1952, Clive Barker has written and produced a number of plays, including The History of the Devil and Frankenstein in Love, which are as diverse in style and subject as the fiction he has written since. His volumes of short fiction, Books of Blood, earned him immediate praise from horror fans and literary critics alike. He won both the British and World Fantasy awards, and was nominated for the coveted Booker Prize, Britain’s highest literary award. His bestselling novels include The Damnation Game, Imajica, Coldheart Canyon, The Thief of Always, The Great and Secret Show, Everville, the Abarat series, and The Scarlet Gospels. He is also the creator of the now-classic Hellraiser films as well as Nightbreed and Lord of Illusions.