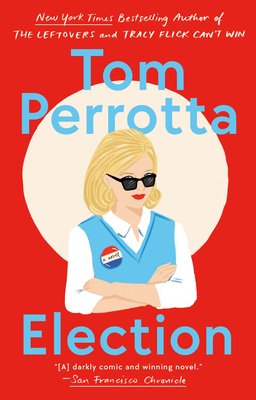 From the New York Times bestselling author of The Leftovers and Tracy Flick Can't Win comes a darkly hilarious novel about a high school election that brings out the worst in everyone—the basis for the film starring Reese Witherspoon!

Tracy Flick wants to be President of Winwood High. She’s one of those ambitious girls who finds time to do it all: edit the yearbook, star in the musical, sleep with her English teacher. But another teacher, staunch idealist Jim McAllister, aka “Mr. M.,” thinks the students deserve better. So he persuades Paul Warren—a well-liked, good-hearted jock—to throw in his hat. But that puts Paul’s sister Tammy in a snit. So she runs too, on an apathy platform, before starting a real campaign...to get herself kicked out of school.

The idea was to educate the students at this suburban New Jersey school in the democratic process and the American way. But with all the sex scandals, smear campaigns, and behind-the-scenes power brokers at Winwood High, it doesn’t look as if they need any lessons....

“Captures the texture of high-school life in a refreshing manner.”—Time Out New York

Tom Perrotta is the bestselling author of ten works of fiction, including Election and Little Children, both of which were made into critically acclaimed movies, and The Leftovers and Mrs. Fletcher, which were adapted into HBO series. He lives outside Boston.
Loading...
or support indie stores by buying on