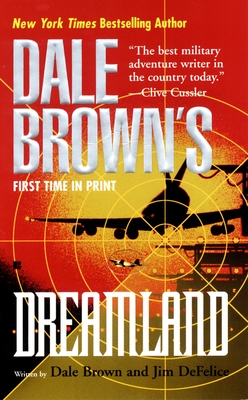 Hidden in the Nevada desert is America’s most advanced aerospace weapons testing facility. Dreamland is the place where the nation’s top minds come to develop artillery and aircraft that push beyond the cutting edge. And where the Air Force’s top guns come to test them—on the front lines of a new era in warfare…

The fiasco of a spy’s infiltration has the Pentagon looking for an excuse to close Dreamland down. To clean up the mess—and save Dreamland from the Congressional chopping block—Lt. Colonel William Tecumseh “Dog” Bastian is sent in. He’s just the guy to shake things up…and does when a situation erupts in Somalia. Into a hotter-than-hot war zone, he sends his own daughter—the pilot of a Megafortress bomber—and a high-tech, unmanned flight system that could make or break the future of Dreamland…

Dale is a volunteer pilot for AirLifeLine, a non-profit national charitable medical transportation organization who fly needy persons free of charge to receive treatment. He also supports a number of organizations to support and promote law enforcement and reading. He is a member of the Airplane Owners and Pilots Association, The Writers Guild, and a Life Member of the Air Force Association and U.S. Naval Institute. He is a multi-engine and instrument-rated private pilot and can often be found in the skies all across the United States, piloting his Piper Aerostar 602P. On the ground, Dale enjoys tennis, scuba diving, and hockey. He lives in Incline Village, Nevada.
Loading...
or support indie stores by buying on