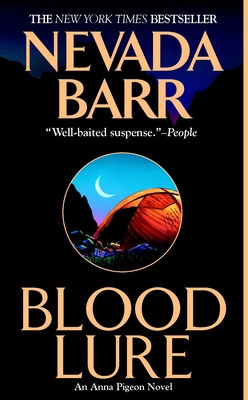 In this mystery in Nevada Barr’s New York Times bestselling series, District Park Ranger Anna Pigeon is betrayed by nature itself, as a most unnatural evil stalks its prey in the pristine West…

Straddling the border between Montana and Canada lies the Waterton-Glacier International Peace Park—Anna’s home away from home when she is sent on a cross-training assignment to study grizzly bears. Along with bear researcher Joan Rand and a volatile, unpredictable teenage boy, Anna hikes the back country, seeking signs of bear. But the tables are turned on their second night out, when one of the beasts comes looking for them. Daybreak finds the boy missing, a camper mutilated, and Anna caught in a grip of fear, painfully aware that her lifelong bond with nature has inexplicably snapped...

“DOWNRIGHT SPINE-TINGLING...Blood Lure is an exciting read, and its wilderness setting puts it in a league of its own.”—Pittsburgh Post-Gazette

“A CAPTIVATING STORY distinguished by her keen appreciation of nature, both Mother and human.”—The San Diego Union-Tribune

“A MUST-READ FOR BARR FANS and a great place to start for everyone else.”—Rocky Mountain News

“ALL IS NOT WELL IN GRIZZLY COUNTRY...Barr’s red herrings and sly twists culminate in one huge payoff.”—Entertainment Weekly

Formerly an actress and a park ranger, Nevada Barr is now the award-winning, New York Times–bestselling author of the Anna Pigeon mysteries and numerous other books and short stories. She lives in New Orleans with her husband and various pets.
Loading...
or support indie stores by buying on