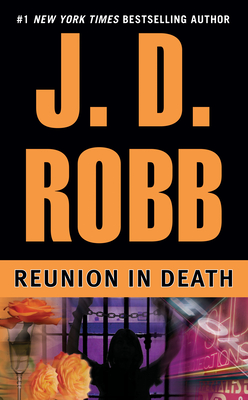 A birthday bash sets the scene for a frightening reunion with a killer from Eve Dallas’s past in this novel in the #1 New York Times bestselling In Death series.

At exactly 7:30 p.m., Walter Pettibone arrived home to over a hundred friends and family shouting, “surprise!” It was his birthday. Although he had known about the planned event for weeks, the real surprise was yet to come. At 8:45 p.m., a woman with emerald eyes and red hair handed him a glass of champagne. One sip of birthday bubbly, and he was dead.

No one at the party knew who she was, but Detective Eve Dallas remembers her all too well. Eve was personally responsible for Julianna Dunne's incarceration nearly ten years ago. And now, let out on good behavior, she still has nothing but bad intentions. It appears she wants to meet Dallas again—in a reunion neither will forget...

Praise For Reunion in Death…

“Eve and Roarke are back and in exceptional form. The progress of this multifaceted relationship is a magnificent ride that just keeps getting better. When you add on the layer of top-notch suspense, it forms a truly unbeatable mix.”—RT Book Reviews

“A satisfying, well-paced novel that offers readers a little of everything—sex, death, family drama and well-orchestrated chase scenes. Although Robb's plot is tight and suspenseful, the real pleasure here comes from watching Eve struggle to maintain her distance from others, even as she finds herself tied ever more closely to her friends and family by the bonds of love.”—Publishers Weekly