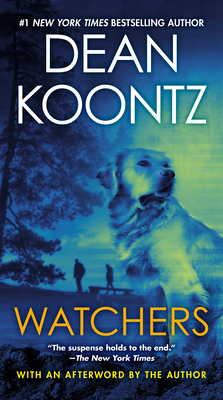 A “superior thriller”(Oakland Press) about a man, a dog, and a terrifying threat that could only have come from the imagination of #1 New York Times bestselling author Dean Koontz—nominated as one of America’s best-loved novels by PBS’s The Great American Read.

On his thirty-sixth birthday, Travis Cornell hikes into the foothills of the Santa Ana Mountains. But his path is soon blocked by a bedraggled Golden Retriever who will let him go no further into the dark woods.

That morning, Travis had been desperate to find some happiness in his lonely, seemingly cursed life. What he finds is a dog of alarming intelligence that soon leads him into a relentless storm of mankind’s darkest creation...

“His best story yet! Cross Lassie with E.T., add a touch of The Wolfen and a dash of The Godfather, and you get a sense of some of the ingredients in this thriller....this is the sort of thoroughly frightening and entertaining tale that has its readers listening for noises in the night.”—Publishers Weekly

“His best ever, an imaginative and unusual blend of sense and sentiment. A fable about love and trust...with echoes of Frankenstein and The Island of Dr. Moreau. A breakthrough for Koontz.”—Kirkus Reviews

“Convincing characters, good dialogue...written in prose of a literary quality that puts most bestselling authors to shame.”—Los Angeles Daily News

“Watchers is so well crafted that it is nearly everything one could wish for in a modern suspense novel....First-class entertainment.”—The Cleveland Pain Dealer

“Dean Koontz is a prose stylist whose lyricism heightens malevolence and tension. [He creates] characters of unusual richness and depth.”—The Seattle Times

“In every industry there exist ‘artists’ that are not only unforgettable, but know their craft better than the rest. Dean Koontz...is among these artisans.”—Suspense Magazine

“[Koontz] has always had near-Dickensian powers of description, and an ability to yank us from one page to the next that few novelists can match.”—Los Angeles Times

“Perhaps more than any other author, Koontz writes fiction perfectly suited to the mood of America...novels that acknowledge the reality and tenacity of evil but also the power of good...[and that] entertain vastly as they uplift.”—Publishers Weekly

Dean Koontz, the author of many #1 New York Times bestsellers, lives in Southern California with his wife, Gerda, their golden retriever, Elsa, and the enduring spirit of their goldens, Trixie and Anna.
Loading...
or support indie stores by buying on