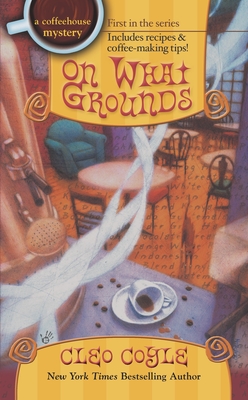 On What Grounds (A Coffeehouse Mystery #1)

Clare Cosi used to manage New York City’s historic Village Blend coffeehouse, until she opted for quieter pastures and a more suburban life. But after ten years away she’s back in action and back to the grind, serving up steaming hot caffeine one cup at a time.

With a sprawling rent-free apartment directly above the coffeehouse, her cat Java by her side, and plenty of redecorating ideas, Clare is thrilled to return to work—until she discovers the assistant manager dead in the back of the store, coffee grounds strewn everywhere.

NYPD Detective Mike Quinn finds no sign of forced entry or foul play and deems the whole thing an accident. But despite the attractive investigator’s certainty, Clare isn’t convinced. Now, if she wants to get to the bottom of things she’ll have to do some sleuthing of her own—before anyone else ends up in hot water...

Praise For On What Grounds (A Coffeehouse Mystery #1)…

CLEO COYLE is a pseudonym for Alice Alfonsi, writing in collaboration with her husband, Marc Cerasini. Both are New York Times bestselling authors of The Coffeehouse Mysteries, now celebrating over ten years in print. Alice and Marc are also bestselling media tie-in writers who have penned properties for Lucasfilm, NBC, Fox, Disney, Imagine, and MGM. They live and work in New York City, where they write independently and together, including the nationally bestselling Haunted Bookshop Mysteries.
Loading...
or support indie stores by buying on