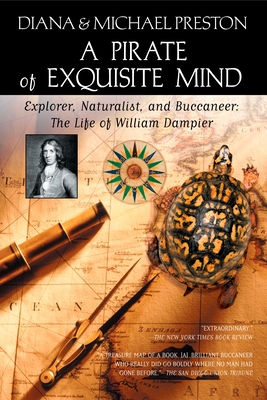 A Pirate of Exquisite Mind

The Life of William Dampier: Explorer, Naturalist, and Buccaneer

Seventeenth-century pirate genius William Dampier sailed around the world three times when crossing the Pacific was a major feat, was the first explorer to visit all five continents, and reached Australia eighty years before Captain Cook. His exploits created a sensation in Europe. Swift and Defoe used his experiences in writing Gulliver's Travels and Robinson Crusoe. Darwin incorporated his concept of "sub-species" into the theory of evolution. Dampier's description of breadfruit was the impetus for Captain Bligh's voyage on the Bounty. He was so influential that today he has more than one thousand entries in the Oxford English Dictionary, including such words as chopsticks, barbecue, and kumquat. Anthropologists still use his work.

Diana Preston is an Oxford-trained historian, writer, and broadcaster who lives in London, England. She is the author of The Road to Culloden Moor: Bonnie Prince Charlie and the ’45 Rebellion and A First Rate Tragedy: Robert Falcon Scott and the Race to the South Pole.
or
Not Currently Available for Direct Purchase