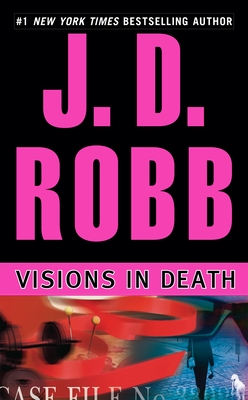 Detective Eve Dallas searches the darkest corners of Manhattan for an elusive killer with a passion for collecting soulsin this novel in the #1 New York Times bestselling In Death series.

On one of the city's hottest nights, New York Police Lieutenant Eve Dallas is sent to Central Park—and into a hellish new investigation. The victim is found on the rocks, just above the still, dark water of the lake. Around her neck is a single red ribbon. Her hands are posed, as if in prayer. But it is the eyes—removed with the precision of a surgeon—that have Dallas most alarmed.

As more bodies turn up, each with the same defining scars, Eve is frantic for answers. Against her instincts, she accepts help from a psychic who offers one vision after another—each with shockingly accurate details of the murders. And when partner and friend Peabody is badly injured after escaping an attack, the stakes are raised. Are the eyes a symbol? A twisted religious ritual? A souvenir? With help from her husband, Roarke, Dallas must uncover the killer's motivation before another vision becomes another nightmare...

Praise For Visions in Death…

“The danger gets way too close to home in this newest chapter in the gripping In Death series. Without a doubt, this is one of the most consistently excellent, thrilling and emotionally gripping series ever published.”—RT Book Reviews

“A sassy, smart-alecky read, possessing the warm characterizations and witty dialogue that have earned Robb/Roberts her huge and loyal readership.”—Publishers Weekly