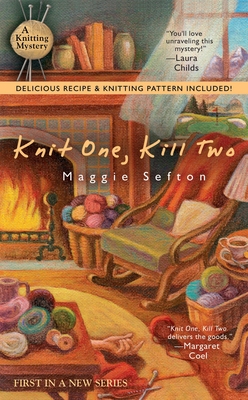 Despite the fact that her aunt was an expert knitter, Kelly Flynn never picked up a pair of knitting needles she liked—until she strolled into House of Lambspun. Now, Kelly is about to learn how to knit one, purl two, and untangle the mystery behind her aunt’s murder...

Kelly would be the first to admit her life in Washington, D.C., is a little on the dull side. But coming back to Colorado for her beloved aunt’s funeral wasn’t the kind of excitement she was seeking. The police are convinced that her Aunt Helen’s death was the result of a burglary gone bad, but for the accountant in Kelly, things just aren’t adding up. After all, why would her sensible, sixty-eight-year-old aunt borrow $20,000 just days before her death? With the help of the knitting regulars at House of Lambspun, Kelly’s about to get a few lessons in cranking out a sumptuously colored scarf—and in luring a killer out of hiding...

Maggie Sefton is the author of the New York Times bestselling Knitting Mysteries. She was born and raised in northern Virginia, where she received her bachelor’s degree in English literature and journalism. While Sefton has worked as both a CPA and a real estate broker, she feels that neither of those endeavors compare to the challenge of creating worlds on paper. She is the mother of four grown daughters, currently scattered around the globe, and resides in the Rocky Mountains of Colorado with two very demanding dogs.

Praise For Knit One, Kill Two (A Knitting Mystery #1)…

“A mystery with more twists and turns than the scrumptious yarns in the fictitious shop of Lambspun...A clever, fast-paced plot, with a spunky sleuth and a cast of fun, engaging characters...Delivers the goods.”—Margaret Coel, New York Times bestselling author

“Enjoyable...Series fans will delight in the side action of the regular cast of characters and be on the edge of their seats with a cliff-hanger ending.”—Publishers Weekly